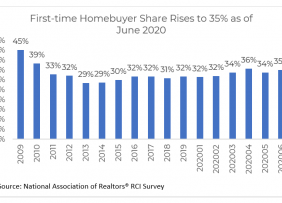 The share of first-time buyers is now trending higher than the 29% to 32% average in the years since 2012.
By:

Compliance giving you a headache? Azimuth GRC revolutionizes the world of regulatory compliance by providing companies a single software platform that easily manages compliance AND provides automated updates on the ever-changing regulations handed down by federal and state governments.  Azimuth GRC has the largest structured inventory of laws and regulations available in the mortgage industry, creating a single source of truth that allows companies and organizations to check every box when it comes to compliance. Enjoy our demo!

ValueLink Direct is an end-to-end valuation management solution that enables Lenders to consistently deliver faster, accurate and reliable valuations. With a combination of automation, artificial intelligence, mobile technology and powerful reporting and analytics, ValueLink simplifies the valuation process for lenders.

Direct enables automation of the entire valuation process resulting in at least 30% reduction in turnaround times.

Blend Close offers a single integrated closing experience with support for all closing types (Remote online, Hybrid, traditional wet-sign) and includes all of the necessary functionality for eSign, Remote Online Notarization, generation and signing of eNote, and integration to an eVault.

Originally scheduled for launch in Q4 2020, Blend accelerated the launch to May 2020 because of increased demand due to COVID-19.

Developer Portal is a single location for accessing Freddie Mac APIs. It’s designed to make it easy for both developers and business partners to understand the value APIs can deliver, test and experience them firsthand and ultimately build them to drive efficiency in their business.

APIs give lenders access to the data they need to make fast, efficient decisions.

APIs work within your current workflow, so you don’t have to undergo heavy system integrations. 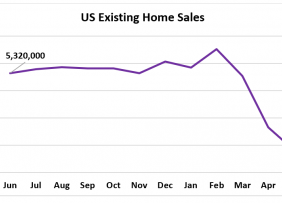 Mortgage applications gained 4.1% last week as mortgage rates fell below 3% for the very first time, according to a report by the Mortgage Bankers Association.

The unadjusted purchase index increased 2% last week and was up 19% compared to last year – the ninth straight week of year-over-year increases for purchase activity, according to the report.

“Applications increased last week despite mixed results from the various rates tracked in MBA’s survey,” said Joel Kan, MBA’s associate vice president of economic and industry forecasting. “There continues to be strong home-buyer demand this summer, as home shoppers have returned to the market in many states.”

After hitting a record low in MBA’s survey last week, the 30-year fixed rate mortgage rose slightly to 3.2%, however, some creditworthy buyers were offered rates as low as 2.98%, according to the report.

As a result, these low rates drove a 5% weekly gain in refinances and a 122% increase from a year ago, Kan said.

The Market Composite Index, a measure of mortgage loan application volume, also gained 4.1% on a seasonally adjusted basis from one week earlier.

Here is a more detailed breakdown of this week’s mortgage application data:

Taken from the July issue of HousingWire Magazine, Homie is making changes on what it calls a “stagnant industry.” The company is looking to provide a one-stop-shop experience and simplify the way homes are bought and sold.

Earlier this year Homie, which launched in 2015 in Utah and expanded into Arizona in 2018, announced it was set to move into three new states after the company raised $23 million in new funding.

The company has been in growth mode for several years now. It started as a flat-fee real estate company, before expanding into mortgage lending in 2017. Homie now also offers title insurance and homeowners insurance.

The rest of this content is for HW+ members. Join today with an HW+ Membership! Already a member? log in

We are halfway through the year and mortgage rates have hit a low six times so far. With mortgage interest rates at the lowest they have ever been, the demand for housing is on the rise.

Drivers of the lowest mortgage rates in history

Several factors play into mortgage rates. Specifically, this year, the Federal Reserve has played a major role in keeping rates at their current low levels. They have stabilized the mortgage market by consistently buying mortgage-backed securities to ensure the housing market remains steady as it’s important that borrowing costs are cheap to avoid a housing crisis following a pandemic.

In addition to the Fed buying MBS, we’re also seeing the natural supply and demand of a healthy mortgage market, which is a good sign. For example, jumbo rates have come down despite the Fed not buying mortgage backed securities in the jumbo space.

Typically, bad news leads to lower rates in the mortgage world. With recent news of coronavirus cases spiking in certain areas of the country and the potential of a second wave in the fall when schools reopen, money is going into a safer place – mortgage bonds and treasuries – and that keeps rates low.

Purchase applications are up 33% year over year (from June 2019 – June 2020). This is a huge increase. Part of this spike in applications is due to low activity in March and April when the pandemic first hit. This pushed a lot of the current demand into May and June.

Additionally, homeownership has become more important now than ever before. It’s where we live, work, go to school, workout and entertain. This has driven a big push out to the suburbs and many wanting to upgrade to a bigger space. A 900-square foot condo might have seemed like a good idea four months ago, but maybe not as practical now. Renters and owners alike are reevaluating what they want in a living space.

According to Redfin, more than half of their offers were part of bidding wars for the second month in a row in June. Boston had the highest bidding war rate in June, of 72.4%, staying on top after 67.2% of offers had a bidding war in May. In June, the number of homes overall for sale in the U.S. was down 21.3% year over year, while the number of new listings was down 12%, leaving inventory at its lowest level since at least 2012.

This will likely be the normal for some time so it’s important for buyers to be prepared. If a buyer knows their numbers – what their monthly payments will be, what down payment is needed, for a range of prices, they will not be overwhelmed by the competitive market. Prepared buyers will have success, win offers, and do well in an overbid situation.

In markets like Boston, the last two years a large percentage of homes have sold over asking. Now, just because something is going for over the asking price does not mean someone is overpaying. There are a lot of buyers that went over asking in these markets three, four and five years ago and their houses are worth a lot more money today than they were a couple of years ago. And those people don’t feel like they overpaid.

The importance of new construction in a low inventory market

Homebuilders saw the strongest June sales since the last housing boom. Sales of newly built homes jumped 55% annually in June. We’re seeing more new construction in the suburbs as the pandemic is pushing from the cities. We’re also seeing the desire for more customization in homes as people spend more time in them in the new normal. It was the largest annual gain since homebuilding began again following the epic housing crash a decade ago. It is also the highest pace since the height of the unprecedented housing boom in 2005.

In short, we’re seeing a rise in interest of new construction as people want more space and more customization in their homes to fit their needs.